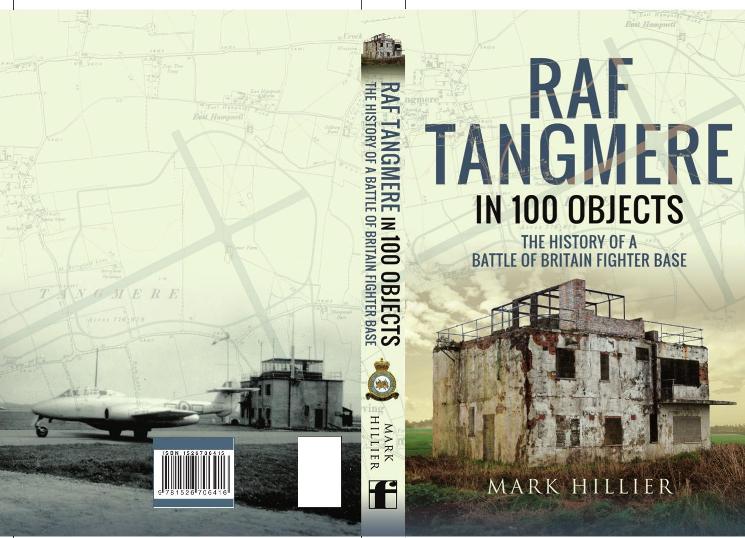 A new and exiting project with Pen and Sword in conjunction with the Tangmere Aviation Museum. This book will be a coffee table style photographic book with HD photos depicting items that are associated with and highlight the history of  this well known RAF station. From its beginnings as a bomber station for the USA in the first world war to its time with the High Speed flight post World War 2. Each item will be presented in Chronological order with a write up of its significance and background.  A fascinating look at the history of the airfield through items from books, documents, aviation art through to buildings. Due out in 2020.

The Item chosen to illustrate is  Hurricane PZ865 repainted in Kuuelwaschers colours with his distinctive nose art.    The Night Hawk Squadron Leader Karel Miloslav Kuttelwascher DFC and Bar, known as "Kut" One of Tangmeres legends of World War 2 amongst others must be Karel Kuttlewacher who flew a hawker Hurricane coded JX-E with the nose art which depicted a scythe and titled “night reaper”. He joined the Czech Air Force in 1934, escaping through Poland and onwards to France after the German invasion, he flew for the French in the Battle of France.  In Britain, Kuttelwascher was assigned to No. 1 Squadron RAF on 3 October 1940 with a rank of Sergeant, and is recorded as a participant in the Battle of Britain. In December, the squadron was moved to RAF Northolt and flew combat missions over northern France. On 8 April 1941, Kuttelwascher made his first confirmed kill – a Messerschmitt Bf 109. In the next two months, he added two more. He took part in the Channel Dash before the squadron were engaged on a new type of operation – "night intruder" missions over France where he had considerable success flying from Tangmere. Karel later commented on his operations:- “A full moon is always a good time to fly. We can follow the canals of Holland and the gleaming railway lines across northern Europe. Like the cats-eyes on the roads, moonlight reflects from the railway lines and we follow them. I become like a night hawk searching for my target. I want to destroy the planes not the people. When we have done our work, we head home as fast as lighting because we have no more ammunition and cannot fight back if we are spotted. The white cliffs of Dover edging the coast are like welcoming arms stretching out to us. We are home as they pass beneath our wings and shield us like a closing curtain. Our ground anti-aircraft guns shoot any enemy who dare to follow us. I was safe once I crossed those beautiful, long cliffs. Behind me lay my homeland and other shattered countries under occupation. We were trying to free those people. We all did what we could to damage the enemy. We were ready to do whatever it took.”   “Once in enemy territory,” he explained, “our tactic was to pick off their aircraft parked on the ground or, if possible catch them unaware as they flew down the runway ready to take off. When they do a circuit ready to land they are concentrating on landing and cannot look out for our approach. I often destroyed the plane before they had time to work out what was happening. I set off home even faster than my arrival and they never did catch me. My beautiful machine was very fast. Our planes were so manoeuvrable and we could twist away from the enemy”   Karel Kuttelwascher claimed 18 confirmed air victories during the war. Karel Kuttelwascher was also the RAF's most effective night intruder and sixth ranked night fighter. He was to be awarded the Czechoslovak War Cross 1939 five times, as well as the Distinguished Flying Cross with Bar, and the Croix de Guerre